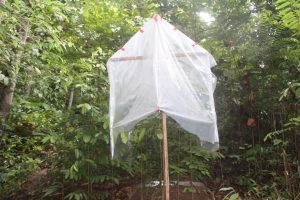 In a recent publication in Nature Ecology and Evolution, Dr Michael O’Brien, Glen Reynolds, Robert Ong and Andy Hector, investigate the link between drought and climate change in tropical forests. It is known that occasional periods of drought are typical of most tropical forests, but climate change is increasing drought frequency and intensity in many areas across the globe, threatening the structure and function of these ecosystems. The study took place in Borneo, Malaysia and was conducted by planting tropical tree seedlings into mixed groups and monocultures and using plastic sheeting to build clear huts over them to prevent rainfall and simulate drought events similar to those caused by El Niño, which occur irregularly in Borneo. By altering both the rainfall and seedling mixtures, it was possible to test the interactive effects of diversity and drought on seedling growth and gain a better understanding of seedling response to future droughts, which are likely to increase under climate change.

The results of the study found that all seedlings responded to drought, but that seedlings in more diverse groups had less water stress than seedlings in monocultures after a severe drought. In addition, seedlings in the diverse groups maintained their growth similar to seedlings that never experienced drought. Therefore, complementary interactions among multiple species delayed the point at which water limited growth. Because seedling growth determines the future forest structure, these results demonstrate the importance of plant diversity for promoting drought resistance in tropical forests.

These findings have two major implications for our understanding of tropical forests under climate change. First, diversity promotes tree resistance to drought in tropical forests, which is important because drought is predicted to become more frequent and severe under climate-change scenarios. Second, because seedlings in monoculture neighborhoods were more inhibited by reduced water, drought has a role in driving diversity in tropical forests by reducing the success of seedlings in areas with low diversity. This indicates that a feedback exists whereby drought encourages diversity and diverse forests are more resistant to drought. However, this also means that biodiversity loss reduces the resistance of forests to drought which in turn can lead to further biodiversity loss. To prevent this reverse feedback loop, it is essential to conserve biodiversity in tropical forests — both by maintaining existing diverse forests and by using diverse seed mixtures when planting new forests during restoration. Using such diversity strategies will improve forest resistance to climate change.

Read the full paper here: Resistance of tropical seedlings to drought is mediated by neighbourhood diversity