Fifty representatives from government agencies, local and international universities, civil society organisations, and industry players will converge at this workshop to exchange knowledge and explore options for the effective design of riparian buffers in Sabah.

Dr Matthew Struebig of the University of Kent, one of the lead investigators in the LOMBOK Project stated that the research results are based on a five-year collaboration between scientists in UK universities, Universiti Malaysia Sabah, and the Forest Research Centre in Sepilok, to study rivers in oil palm plantations in the south east of Sabah. With funding from the UK’s Natural Environment Research Council (NERC), the British Council, and the Malaysian Industry-Government Group for High Technology (MIGHT) via Newton-Ungku Omar Fund, scientists have established a network of biodiversity monitoring and carbon dynamics plots within riparian buffers to test the effectiveness of riparian reserves. In particular, they have been investigating the effects of the quality and width of riparian buffers on water quality, aquatic and terrestrial biodiversity, and carbon fluxes.

Dr Agnes Agama, Assistant Director of SEARRP stated “We have been working to connect LOMBOK Project scientists with the DID and EPD. Both agencies have provided valuable input and advice that has helped the scientists to summarise their research and make it available in a form that is useful for planners and policy-makers in Sabah. Today’s workshop is a result of our collaboration with DID and EPD to share the research on the value of riparian buffers for biodiversity with the wider stakeholder community in Sabah.”

Permanent rivers in Sabah that are more than 3 metres wide require a vegetation zone of at least 20 m from each riverbank, as provided under the Sabah Water Resources Enactment (SWRE) 1998. This regulation is designed to protect water quality, water quantity, and aquatic environments. There are other regulations, such as Sabah Land Ordinance (Cap. 68), Sabah Environment Protection Enactment 2002 and Sabah Forest Enactment 1968, which allow for increasing riparian widths beyond the minimum 20m set by the SWRE 1998.
Strengthening the effectiveness of riparian reserves is crucial for improved landscape connectivity as well as the protection of important ecosystem services such as carbon sequestration, water quality and water quantity. 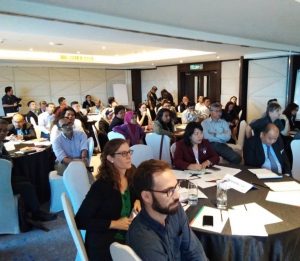 Participants at the Riparian Workshop