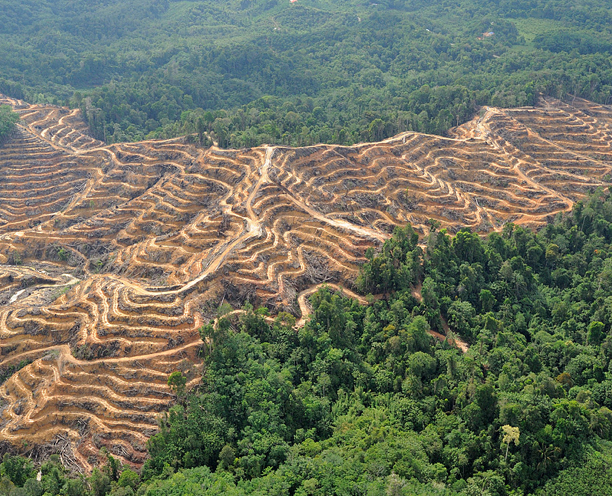 Rainforests across the tropics are being cleared and fragmented to make way for agricultural and timber plantations. Where SEARRP operates in SE Asia, the rapid expansion of the oil palm industry is a major cause of forest fragmentation, but responsible growers (who are complying with sustainability standards) are attempting to design landscapes with the aim of protecting remaining patches of natural forest to conserve as much biodiversity as possible in the landscape – while maintaining the economic benefits of plantations.

SEARRP scientists have long been investigating the effects of forest fragmentation on biodiversity and forest processes, and there is now a substantial body of research to draw on to help develop policy for better land-use planning in the oil palm industry. For example, Professor Jane Hill and her group at the University of York have looked at insect responses to fragmentation and connectivity in oil palm landscapes, while SEARRP’s ambitious SAFE project, headed up by Dr Rob Ewers at Imperial College, is a long-term landscape-scale experiment (it’s one of the largest ecological field experiments in the world) which is looking at the impacts of fragmentation in a ‘designed’ plantation in Sabah.

SEARRP generates world-leading academic research, but to ensure that it makes a difference to the planet and society we have to make it both accessible and policy-relevant. Dr Jen Lucey is responsible for knowledge exchange at SEARRP, and has built relationships with key players in the sustainable palm oil community to understand their science needs for policy development. She identified how SEARRP’s fragmentation research could fit into the policy dialogue and re-synthesised the available data to develop and interpret findings that could be easily incorporated policy. For example, her syntheses showed that although very large tracts of forest (from tens of thousands to over a million hectares) are necessary to conserve the full complement of species that you would expect in a continuous rainforest. Importantly, in the plantation context, we also found that forest patches of a few hundreds of hectares could provide substantial biodiversity benefits and, moreover, were usually able to regenerate naturally. By contrast forest patches of only a few tens of hectares were found not to support many more species than that of the oil palm planted area and were unlikely to be viable in the long term, at least without applying restoration treatments, since the reproductive capacity of the dominant rainforest trees species was severely reduced. Research is ongoing as part of SEARRP, particularly as part of the SAFE Project, to investigate the role that even very small fragments might play in providing landscape connectivity.

The policy implications being that when designing new plantings, growers should ideally avoid fragmenting existing areas of large tracts of forest, even if they are very degraded, and should plan conservation set-asides that are at least a few hundred hectares in size, if available. The creation of very small patches of forest should be avoided, but if these already exist in plantations they should not be cleared since they may help some species move across the landscape to larger patches of forest.

As a result of these activities SEARRP fragmentation science has been incorporated into two key policy developments: The High Carbon Stock (HCS) Approach, which provides a land planning methodology for companies to meet their zero net deforestation commitments, and the development of a new simplified High Conservation Value toolkit for smallholders. Through both these initiatives, SEARRP science has influenced policy on the conservation value of forest set-asides.

Effective implementation of these policy guidelines should help to reduce the level of fragmentation of forests, encourage responsible growers to avoid large tracts of forest, and to improve the ability of agricultural landscapes to support biodiversity through larger, more viable conservation set asides. Ultimately, these efforts will help to reduce tropical biodiversity losses and improve sustainable plantation management. 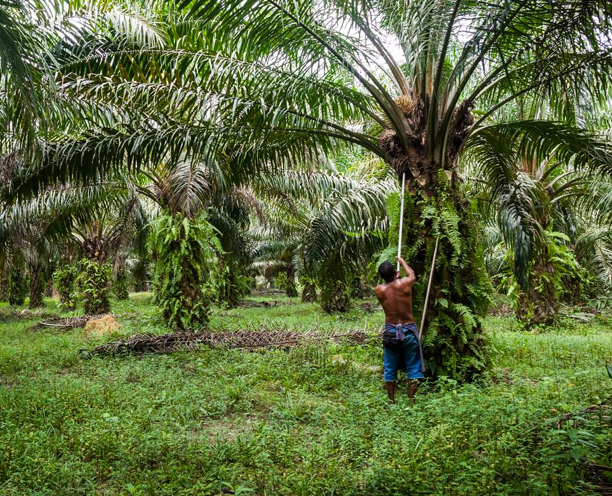 The oil palm industry poses one of the biggest threats to the rainforests of SE Asia, but plantations create huge economic benefits at all scales from governments down to smallholders. Finding a way to balance these competing issues is vital and SEARRP science is at the forefront of finding solutions to this complex problem.

We set up the Social and Environmental Oil Palm Research (SEnSOR) programme to test whether the major environmental and social certification standard for palm oil (the RSPO) is delivering sustainability. The SEnSOR programme is a collaborative, multi-disciplinary consortium of world leading scientists in the fields of biodiversity, soils and hydrology, greenhouse gases, and social sciences. We are using state-of-the-art scientific techniques to answer key questions such as- Is RSPO certification halting deforestation and biodiversity losses, reducing GHG emissions and improving livelihoods?

SEnSOR has been designed from the outset to contribute to the development of policy and best practice. We work directly with key stakeholders, including the RSPO (who co-funds the project), major oil palm growers, influential Non-Governmental Organisations and other important players in the supply chain. By listening to their perspectives, we ensure our research is aligned with their needs and that it arrives in a timely way and in clear, understandable language. We communicate our findings in a wide range of ways, including talking at industry conferences, running workshops, writing science-for-policy papers, utilising social media and sitting on policy working groups and scientific advisory panels.

SEnSOR research is not only answering the key question that NGOs, companies and consumers are asking, i.e. “is RSPO palm oil really sustainable?” but also contributing to the complex issues of how to make conservation set-asides more effective and how to raise living standards further. SEnSOR research brings scientific integrity to the sustainability agenda by rigorously and independently testing the sustainability standards.

Ultimately, the aim of SEnSOR is to provide the knowledge necessary to create change in the practices of the oil palm industry that will result in halting deforestation and associated biodiversity loss and carbon emissions, improving the rights and livelihoods of people working in or affected by the industry and conserving our vital soil and water resources. 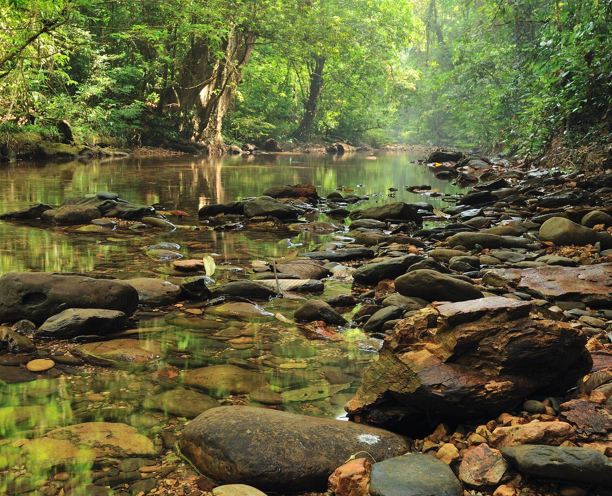 SEARRP’s vision is that exceptional science informs and inspires the conservation of tropical forests – which is not straightforward to achieve when, as an organisation, we neither own or manage forests, or even directly lobby for their protection. What we can do is enable the world-leading research that is essential to underpin conservation decision making, make sure that this science is accessible to policy makers and maintain a presence on-the-ground to provide continual support and input to government, land-managers and NGOs.

In Sabah, major strides have been made in achieving this vision since SEARRP was established in 1985. Our base at Danum Valley, which represents the most intact, pristine lowland forest that remains in Malaysia, and possibly the whole of SE Asia, was fully protected in 1995. The decision to protect Danum was made in large part due to the profile that the field centre had already achieved following SEARRP’s first 10 years of scientific endeavours. In the early 2000s, ‘Sabah’s Lost World’, the extraordinary Maliau Basin, a giant sunken plateau the size of Singapore and located 100 km to the west of Danum, was also protected – to be followed, in 2012, by the equally stunning Imbak Canyon. All of these primary forest protected areas now have associated research programmes.

Over the past 10 years, the 150,000 hectares covered by the primary forests of Danum, Maliau and Imbak has been supplemented by a further half million hectares of protected forest which now buffers and connects these three pristine conservation areas. This swathe of protected forest, stretching over 200km from the coastal plains surrounding Lahad Datu on Sabah’s east coast, through the low-lying forests of Danum and west to the central uplands of Imbak Canyon and Maliau Basin, represents the most important stretch of forest that remains intact on the island of Borneo. This vast corridor, which covers an area 4 times the size of Greater London, comprises an altitudinal gradient of over 1,600 metres and is of inestimable ecological and conservation value – a value which has been demonstrated by the 30-year body of SEARRP science.

The Conservator of Forests and Director of the Forestry Department in Sabah, Sam Mannan, has acknowledged SEARRP’s contribution as having, to quote: “greatly strengthened my hand in pressing the State Government to conserve further areas of critically important habitat, including some of the finest areas of primary forest in SE Asia – the Danum Valley, Maliau Basin and Imbak Canyon Conservation Areas – which are soon to be nominated for World Heritage listing”.

Over the coming years, and supported by a generous grant from the US-based Rainforest Trust, SEARRP will be expanding our direct support of conservation planning. In partnership with the Sabah Forestry Department, the Carnegie Airborne Observatory, Partners of Community Organisations Sabah (PACOS) and the BC Initiative (BCI) we will be identifying a further 400,000 hectares of new protected forests. Conservation decisions will be based not only on the best available science, but also with consideration to the support which forests must play to the livelihoods of forest dependent communities. 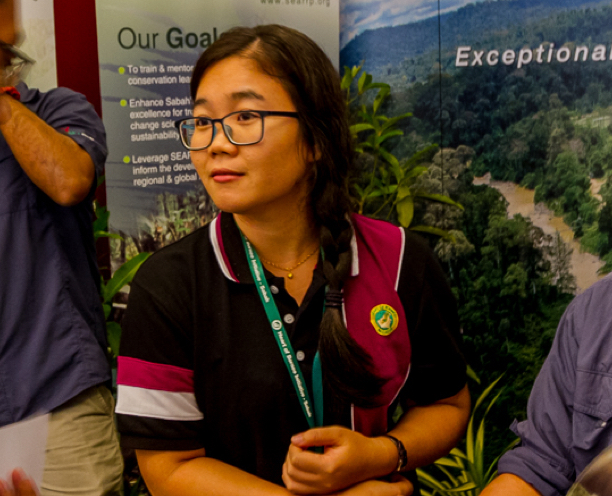 Meeting the challenge of successfully protecting and sustainably managing biodiversity takes place in a vast and complex policy landscape where debate and decision-making must be informed by a robust and independent science base. SEARRP’s Assistant Director Dr Agnes Agama, draws on over three decades of exceptional rainforest research and the vibrant scientific community behind SEARRP, is working to connect local policy-makers with this evidence base. Her work synthesises and translates scientific insights that enable Sabah’s policy framework to balance conservation priorities against economic development agendas.

Agnes is able to build on SEARRP’s long history of collaboration with government partners in Sabah. In the 1990s, SEARRP supported numerous research projects which aimed to understand the impacts of timber harvesting on rainforest ecosystems. This resulted, in the design of Reduced Impact Logging (RIL) techniques, now an industry standard and is mandatory across Sabah. More recently, SEARRP’s research on the impacts of climate warming on range shifting species of Mt. Kinabalu has directly contributed to Malaysia’s National Policy on Biological Diversity 2016-2020 – which is setting the imperative for country-level climate-focussed biodiversity research. Agnes was also part of the multidisciplinary consortium engaged to develop a policy formulation process, spanning two years, to interpret the international Aichi Biodiversity Targets and set country-level targets for biodiversity conservation across Malaysia.

As Sabah’s state government has jurisdiction over land and natural resources, national policies such as the one on biological diversity serve to set broad directives that enable state-driven regulation. The Sabah Government bears the responsibility for developing policies and regulations that determine the status and management of Sabah’s biodiversity, protected areas and water courses, as well as the state’s forestry, agriculture and other land-use sectors. Sabah’s policy framework is both extensive and dynamic. There is an ongoing revision to update the Sabah Biodiversity Strategy 2012-2022 and a forthcoming Sabah State Policy on the Environment. Enabling an independent evidence base to contribute towards the formulation of policy and implementation of prescribed actions forms much of the task ahead – to which SEARRP is well placed to make a major contribution.

At recent conferences in both the UK and Sabah, Agnes organised delegations of SEARRP scientists to present and discuss findings to an audience of national and local policy-makers, researchers and students. In Sabah, this included civil society organisations and indigenous representatives. Conference deliberations resulted in calls for science-policy working groups on enhancing the design of riparian buffers, and on land-use planning for conservation. By leveraging partnerships with key government agencies to establish these working groups, Agnes leads on the coordination of science-policy advice and the provision of key strategic platforms for engaging the scientific community, local policy-makers and practitioners. Working together with colleagues from SEARRP, Agnes aims to better understand science-policy constraints, learn how to effectively communicate scientific insights, foster relevant and timely collaboration to and to place SEARRP firmly at the intersection between science, policy and environmental best practice.